All work : Chuck
[jump to biography] 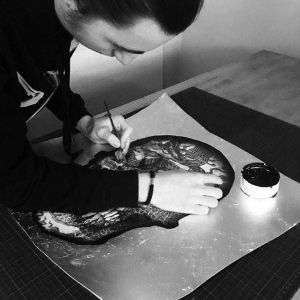 Having a mother as an artist, Chuck has been involved in art in some form since he was able to crawl. He would often spend time in the studio, scribbling and mimicking what his mother painted.

During his school years, Chuck was exposed to many mediums and techniques, allowing him to develop a wide skill set. This led to him being selected for Cambridge college, in two short years he left with a qualification in games development. This exposure to digital art inspired his fascination with the Baroque and Renaissance eras. Coupled with an interest for dark, melancholic atmospheres this provides the base for the work he is now producing.

Chuck is in the early stages of his career as an artist, however with his incorporation of metallic foils and traditional patterns, he is expected to go far in the art industry.

He says of his work My arts speech is its shock value, I like to mix the vibrancy of old era art with the appeal that contemporary art in all its forms holds. I love to create art I am passionate about.